On a slope overlooking the dark waters and densely wooded shores of Laurel Lake we built a spacious and dignified house,” Edith Wharton wrote about The Mount, the estate which she created in the early years of the twentieth century in Lenox, Massachusetts. Among those in her inner circle who came to stay—President Theodore Roosevelt, diplomat Walter Berry, and sculptor Daniel Chester French, whose studio, Chesterwood, was nearby—was her spacious and dignified friend Henry James, who, writing to a mutual friend, described it as “a delicate French chateau mirrored in a Massachusetts pond.”

Read our behind-the-scenes interviews with the actors, artists, and writers who brought to life Edith Wharton's world in Vogue.Wharton planned each detail of the interior and the gardens with meticulous care, bossing architects (including Ogden Codman, Jr., to whom she became close), designers, and gardeners with her customary firmness. She had strong opinions on the subject: In 1897, she’d written, with Codman, Jr., the classic text The Decoration of Houses; and her 1904 book,Italian Villas and Their Gardens, illustrated by her friend, the painter Maxfield Parrish, would become an influential treatise on garden design. All the rooms on the main floor opened onto a long gallery with a vaulted ceiling and Italian furniture. The servants’ wing had a hydraulic elevator. While the house was filled with European influences inspired by her travels in France, Italy, and England, Wharton also integrated features of the American colonial style, including green shutters on all the windows and a striped awning over the center of the terrace. Occupying more than 100 acres, the property included a drive lined with sugar maple trees, an English-style meadow, an American suburban lawn, gravel walks, an elaborate rock garden, fountains, and terraces with views over the lake. There was also a kitchen garden (designed by Wharton’s niece, Beatrix Farrand) and a working farm. Wharton lived in the house in the summer and fall between 1903 and 1908, all the time overseeing improvements and fresh plantings. “Really,” she wrote, “it looks, for a fleeting moment, like a garden in some civilized climate.” At The Mount, she could also indulge her passion for dogs, among them Toto, Miza, and Jules, all eventually buried in a graveyard on the grounds. Since her marriage to Teddy Wharton was deteriorating, she arranged for herself and her husband to have separate but adjoining bedrooms, and since her priority was privacy and work, she created a suite of rooms for herself alone, including a space where she could write in peace, even when she had guests. The money was hers, which gave her freedom in her marriage. Most of it was inherited, but she also earned from her books, and made a great deal more once she could sell film rights. During all of the years except one when she lived at The Mount, patiently assisted by her German tutor turned literary secretary, Anna Bahlmann, she published at least one new book a year—a novel, a collection of stories, or travel sketches.

NY Times Review of Jennie Fields's THE AGE OF DESIRE


‘The Age of Desire,’ by Jennie Fields 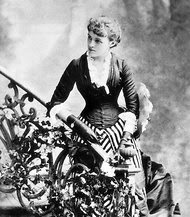 Edith Wharton, circa 1877.
Modern writers keep trying. If anyone would have been humiliated by having his sexuality, or lack of it, explored in serious literature, it would have been Henry James. Fears of posthumous invasions of his privacy led him to a frenzy of letter burning, but the reams that he missed were enough to inspire such speculation by the critic Leon Edel and the novelist Colm Toibin, among many others.
There is no need to speculate about the personal life of Henry James’s friend Edith Wharton, the subject of Jennie Fields’s novel “The Age of Desire.” Wharton’s wild affair, in middle age, with the American expatiate journalist Morton Fullerton — wild on her part, that is, but routine on his — is well documented in the passionate and pathetic letters she wrote to him. Despite her pleas to return them, as a gentleman was obliged to do when a love affair ended, Fullerton, well known as a serial cad to assorted besotted ladies and gentlemen, kept and eventually sold letters from both Edith Wharton and Henry James.
There could hardly be a more apt theme for a novel of manners than the struggle of a prominent and respectable lady to disguise her inflamed feelings in order to meet the conventions of society. It is not only her frantic yearning for her lover that is portrayed here, but the fallout expressed in her irritation with her husband and her editorial assistant for unknowingly getting in the way.
A secondary novel-of-manners theme, developed from the author’s research, concerns the relationship between Wharton and Anna Bahlmann, her childhood governess, who became her editorial assistant. With no clear social definition covering such a development, the women vacillate between behaving as friends and colleagues or as mistress and servant.
Authentic letters are quoted to bolster the pitiful way in which Wharton was reduced to writing like a lovesick teenager, snapping “Don’t write me again!” in her anger that Fullerton had, in fact, not written, and a week later pleading that he should have known she didn’t mean it. Bahlmann’s letters pointedly ignore the slights she suffered, as if acknowledging she was in no position to complain. There are credible scenes dramatizing the resulting volatile behavior.
The flaw in this otherwise interesting novel is that its title, mimicking Edith Wharton’s own title, “The Age of Innocence,” presupposes an understanding not just of these personal lives but of the times in which they were lived. Wharton’s novels, including those set in later periods like “The Children” and “The Mother’s Recompense,” are rich with examples of conventions in flux as they symbolize evolving social attitudes. Fields’s novel is rife with examples that are anachronistic and therefore misleading. By the time Edith Wharton’s posthumous love letters were published in the 1980s, it would not be terminally embarrassing for a lady in a dissolving marriage to have a lover. But it’s safe to say that this particular lady would have been embarrassed to see herself and the Parisian society she enjoyed inadvertently portrayed as ignorant and provincial.
The novel’s opening scene takes place in 1907 at an intellectual French salon where, in what passes for arch conversation, the poet Anna de Noailles demands, “Why do they never give the Nobel Prize to a woman?” Someone counters that one had been awarded the peace prize (that would be Bertha von Suttner in 1905). It’s left to the frustrated reader to shout “Marie Curie!” at this supposed hotbed of Parisian sophistication, where no one seems to know that a female 1903 physics winner is toiling in a nearby suburb, on her way to winning her second Nobel Prize, this time for chemistry.
Read the rest at
http://www.nytimes.com/2012/09/02/books/review/the-age-of-desire-by-jennie-fields.html?pagewanted=all
Posted by Edith at 1:32 PM 1 comment:

IN HER 1904 BOOK "Italian Villas and Their Gardens," Edith Wharton wrote that the reader should not "content himself with a vague enjoyment of old Italian gardens, but…extract from them principles which may be applied to home." Wise counsel. Many of the villa gardens of Italy appear grand and out of reach but they offer lessons that can be useful and scalable. The Italian-style walled garden at the Mount, Wharton's home in Lenox, Mass., is a prime example of one of these translations.
An avid motorist, Wharton put her Mercedes through some rigorous road tests while touring in France and Italy with Henry James and others. "Italian Villas" details the architecture and ornament of the gardens she encountered and how they flowed into the landscape. While I read the book years ago, it remains a steady reference for me and was once again pulled out in planning my Tuscany trip this summer.
Italian gardens are characterized by a dominance of manicured green, statuary and water features that often involve stone cascades and ciottolato (mosaic stonework). Villa gardens have a balance of cultivated greenery and natural forest, known as boscoor boschetto, depending on the scale of the villa itself. Architects responsible for hallmarks of the Italian landscape, from the Renaissance through the 20th century, include Cecil Pinsent, Luigi de Cambray Digny, Gaetano Baccani and Niccolò Tribolo.
Villa garden designs were modified to accommodate changing needs over time. Medieval gardens were strictly business, as they had to feed the household. It was not until the Renaissance that embellishments like benches and statues were judiciously added. Rosemary, bay, myrtle and other herbs and medicinal plants were introduced as the garden evolved into a place of pleasure and contemplation. Many gardens contain topiary of yew, cypress, box and ilex, bringing green architecture into the mix.
The role of the garden today in our technology-driven lifestyles may be even more important, and "the principles" of old gardens, as Wharton called them—"to escape, to enjoy, to behold our own patch of beauty and pleasure"—can be applied to your own backyard, rooftop and window box. (Note: Follow in Wharton's footsteps with an Italian tour led by the Mount later this month; visit edithwharton.org for more information.)
http://online.wsj.com/article/SB10000872396390443324404577593250878228644.html
Posted by Edith at 1:30 PM No comments:

NY Times on The Mount 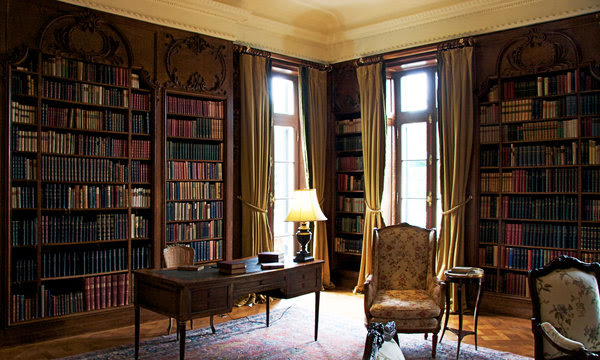 John Arthur
The library at the Mount, in western Massachusetts.

Wharton was no dilettante. In 1897, she and the architect Ogden Codman, who had worked on her homes in New York and Newport, R.I., published “The Decoration of Houses,” a book that railed against the decorative excesses of the Gilded Age and called for a return to classical principles like symmetry. Wharton was championing nothing less than an American Renaissance, said Richard Guy Wilson, an architectural historian at the University of Virginia and the author of “Edith Wharton at Home: Life at the Mount,” out next week from Monacelli Press ($45). The book, which is illustrated with archival and recent photos of the estate (it currently serves as a cultural center, attracting 30,000 visitors a year), marks the 150th anniversary of Wharton’s birth and the 100th anniversary of the year the Mount officially left her hands.
http://www.nytimes.com/2012/08/30/garden/appreciating-edith-whartons-other-career.html