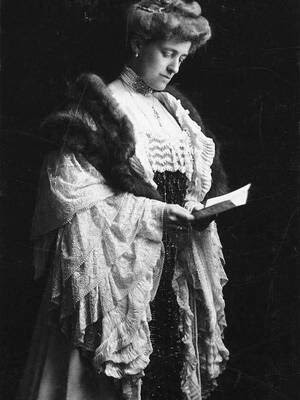 EnlargeBeinecke Rare Book and Manuscript Library, Yale University
Edith Wharton moved to Paris in the early 1900s. Not long after, in 1913, after her affair with Morton Fullerton had ended, she divorced her husband of more than 20 years.
text size A A A
Jennie Fields was well into her new novel about Edith Wharton — and her love affair with a young journalist — when she heard that a new cache of Wharton letters had been discovered. They were written to Anna Bahlmann, who was first Wharton's governess and later her literary secretary. Bahlmann had never been considered a major influence on Wharton, but Fields had decided to make her a central character in her book, The Age of Desire, even before she heard about the letters. She says she felt certain that Wharton and Bahlmann had a strong relationship.
"They had been together for a great part of Edith's life and I knew they had to have been close," Fields says. "So I imagined that was true, but when the letters came out and supported it all, it was eerie and thrilling at the same time."
So Fields got in touch with Irene Goldman-Price, the Wharton scholar who was editing the letters for a new collection called My Dear Governess. The two bonded over their love of Wharton. Goldman-Price says she was fascinated by the fictional world Fields was creating.
"Her imagination makes these people come alive in my mind in ways that they had not before," she says.

Those people are, first and foremost, Edith Wharton, who, according to Goldman-Price, was just coming into her own at the age of 45, where the novel begins.
"She has just finally made a success of writing, which is something that she's wanted to do since she was at least 12 years old," Goldman-Price says. "In 1905, The House of Mirthcomes out. It is not her first novel, but it is her first truly successful novel. She's really feeling her oats."
Enter Morton Fullerton, a young journalist Wharton met while living in Paris. Though he traveled in sophisticated circles, Fullerton wasn't particularly remarkable — but he was charming. And, according to Fields, he had a dubious reputation.
"He was very drawn, apparently, to power and success," Fields says. "He had had affairs with other successful people, both men and women. He was something of a sociopath because he would have these affairs and he would just disappear; [that] was his MO."
Posted by Edith at 12:15 PM No comments: