Proposed Panel for the 2012 SAMLA Conference

Panel Description:
The Edith Wharton Society panel addresses this year’s SAMLA conference theme: "Text as Memoir: Tales of Travel, Immigration, and Exile," examining a wide sections of fiction and non-fiction works.  Edith Wharton is a transatlantic figure whose writings focus on the sometimes fraught interplay between home and exile. In “The Decoration of Houses to The Book of Homelessness: Edith Wharton and Expatriation,” Heath Sledge argues that two pairs of books by Wharton, which bookend the beginning and the end of her career, treat the question of home. The House of Mirth (1905) and the much later Age of Innocence (1920) show Wharton’s progressively broadening notion of what “home” is.

The second pair -- The Decoration of Houses (1897) and The Book of the Homeless (1916) -- reveals that Wharton’s sense of home was a deeply material one, linked to her identity as a writer and a woman.  As a result, Wharton attempts to materialize her missing home textually in the rich descriptive detail of The Age of Innocence in a way that she had seemed not to need to do in The House of Mirth. The second panelist Mary Carney will present “(Con)textualizing Total War: Conflict, Exile, and Material Culture in Wharton’s Essays.” She will examine how the essays in Fighting France, from Dunkerque to Belfort parallel travel texts, creating vivid portraits of the emergence of “total war” in France during World War I. As a transatlantic writer, she illuminates for her primarily American audience the material culture of war and the peculiar world of expatriates in France during the conflict. In the third presentation, Justin Askins will explore the leitmotiv of travel as escape in “Traveling from Despair: Edith Wharton’s Heroines, No Accidental Tourists.” While rarely compared with Herman Melville’s Moby Dick and Mark Twain’s Huckleberry Finn, Wharton’s major works share with these novels the important leitmotiv of travel as escape. Examining major novels and novellas, Askins will illuminate Wharton’s narrative trajectories of the American pursuit of transformative exile. Finally, in “Ethan Frome’s Travel Choices,” Richard Law examines the character development that reveals the courage and misapprehensions of Ethan’s travel dreams. Law shows how the trail of (mis)judgments leads to the catastrophic escape attempt, reflecting Wharton’s portrait of a grotesque reality emerging from the search for exile.

STREETSCAPES/MARY MASON JONES A Woman With an Architectural Appetite 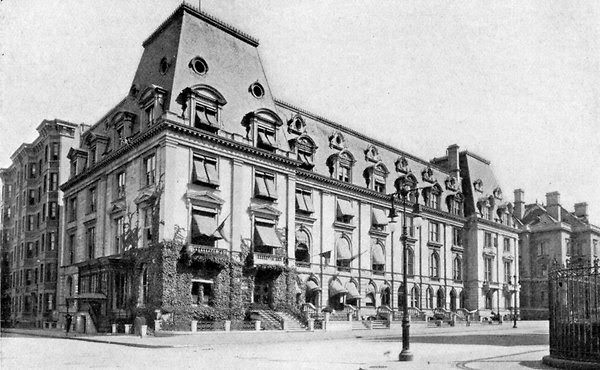 
Marble Row on Fifth Avenue, looking south from 58th Street, with Mary Mason Jones’s house at the far right, at the 57th Street corner, about 1899.

In society in the 19th century, Jones was a grand name of the first order. The daughter of the president of Chemical Bank, Mrs. Jones was considered remarkable in her day: she was an early traveler on the Erie Canal, voyaged through Europe on a sketching tour, and in 1818, after her marriage to Isaac Jones, had the first bathtub in New York installed in her house on Chambers Street. She and two sisters had a triple house on Broadway near Waverly Place; the houses could be thrown together for entertaining.
In 1868, Mrs. Jones began work on another unusual house, at the northeast corner of Fifth and 57th, a part of the city then still on the drawing board, with streets laid out and little more.
The New York Times noted that the two-story mansard roof was carried to “a fabulous height.” That was not the only distinctive aspect: Mrs. Jones also built a neighborhood, an entire row of houses taking up the rest of the block on Fifth Avenue. She had her architect, Robert Mook, clad them in brilliant white marble.
Numbered 741-753 Fifth, they were quite a spectacle in brownstone New York. The marble set off the green grass in the front gardens, the gray slate of the mansard and the green copper trim.
In 1871, a writer for The New York Evening Telegram found the year-old row reminiscent of a church, with Mrs. Jones’s grand house as the front, facing 57th Street, and the rest of the row, stretching back along Fifth, like a nave. Four years later, The Real Estate Record and Guide, while admiring the whole, was able to find fault, saying, “The poverty of the deck cornice spoils the whole when you look more closely.” Apparently this referred to the simplicity of the projection where the main wall meets the mansard.
Mrs. Jones rented out the row, and the 1870 census indicates that her tenants were her equals, at least financially. One was Cyrus Clark, later to be important in developing the Upper West Side, and another was Henry Havemeyer, the sugar merchant, who went on to build a grand house at Fifth and 66th.
Read the rest at
http://www.nytimes.com/2012/07/08/realestate/streetscapes-a-woman-with-an-architectural-appetite.html?_r=
1
Posted by Edith at 7:28 AM No comments:

Lev Raphael
Posted: 07/02/2012 1:42 pm
http://www.huffingtonpost.com/lev-raphael/riding-the-ebook-wave_b_1622892.html
Submit this story
Back in the spring, I gave a workshop on e-book publishing at a writers' conference in Michigan and someone asked me if I'd done any "shorts" for Amazon. I hadn't.
Afterwards, it hit me that I had some good, juicy material I'd filed away not so long ago while doing research in the Gilded Age for a historical novel riffing off of Edith Wharton's The House of Mirth.
The material I'd set aside was mainly a bordello sex scene I really liked, but hadn't figured out how to use. When I got home from the conference, I immediately took out the folder, studied the notes, and realized that I had the makings of a novella.
I love the novella form but hadn't worked in it for many years, so it felt brand new to me. Once I started writing Rosedale the Vampyre, the writing was swift and sure because the subject possessed me.
The book is a dark story of powerlessness and grief that takes a very unexpected turn when its hero crosses over into a different reality and discovers life is entirely more satisfying for him as one of the undead. Set in 1907 New York, it's filled with period detail and sexual obsession. It's my first Gilded Age vampyre story, but it won't be my last.
From writing through production, I was done in two months. That included having the book professionally edited and copy-edited, getting a cover designed, my own proofreading, and seeing the novella formatted and loaded for Kindle and the Nook. Before the e-book revolution, I would've had to amass enough new short stories to add to the novella to make a collection. Then I would've needed to try that collection with an agent, or look for an independent publisher. It could have taken years to reach readers.
Posted by Edith at 7:24 AM No comments: