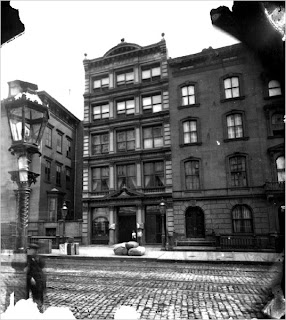 From the New York Times

LIKE several of its neighbors on West 23rd Street, the five-story structure at No. 14 began life as a brownstone but later was converted for commercial use. For many years the ground-floor tenant was Scott’s Flowers, which had three permanent residents: two enormous stuffed bears and a midsize gray-and-white cat named Scottie.

Edith Wharton’s birthplace as it once appeared.

Each morning the bears were hauled out to sun themselves on a bench in front of the shop, and Scottie emerged to plop himself down on the sidewalk and invite passers-by to scratch his back.

In 2007, Scott’s Flowers, along with Scottie, decamped to a new location. The new tenant is a Starbucks. And Starbucks, in the process of reconfiguring a flower shop into a coffee bar, has accidentally recreated a lost vista from the childhood of an earlier resident of No. 14, a little girl known as Pussy Jones, who grew up to be Edith Wharton.

No plaque proclaims the connection. But somewhere behind No. 14’s cast-iron facade stands the shell of the brownstone where Wharton was born on Jan. 24, 1862. In Wharton’s novella “New Year’s Day,” the narrator recalls a visit to his grandmother’s house on 23rd Street, clearly modeled on Wharton’s childhood home.

The house, Wharton writes, had been built by the narrator’s grandfather “in his pioneering youth, in days when people shuddered at the perils of living north of Union Square — days that Grandmamma and my parents looked back to with a joking incredulity as the years passed and the new houses advanced steadily Park-ward, outstripping the Thirtieth Streets, taking the Reservoir at a bound, and leaving us in what, in my school days, was already a dullish back-water between Aristocracy to the south and Money to the north.”

Directly across the street from No. 14 is the south entrance of 200 Fifth Avenue, an office building erected in 1909 on the site of the recently demolished Fifth Avenue Hotel. The office building was constructed according to the hotel’s plan, so its south entrance is located in the same place as the hotel’s, which was directly across the street from the parlor of Wharton’s home.

“She was bad ... always. They used to meet at the Fifth Avenue Hotel.” Thus begins “New Year’s Day,” as the narrator’s waspish mother reiterates her disapproval of the notorious Lizzie Hazeldean, whose affair with Henry Prest had scandalized New York society. The reference to the famous old hotel reminds the narrator that when he was a boy, he had witnessed Lizzie’s downfall himself. It happened on a New Year’s Day in the 1870s, when his family had gathered at the house on 23rd Street, and their luncheon was interrupted by shouts that the Fifth Avenue Hotel was on fire.

“The hotel, for all its sober state, was no longer fashionable,” he tells us. “No one, in my memory, had ever known any one who went there; it was frequented by ‘politicians’ and ‘Westerners,’ two classes of citizens whom my mother’s intonation always seemed to deprive of their vote by ranking them with illiterates and criminals.”

IN real life, the power brokers who frequented the Fifth Avenue Hotel were the people who ran the country during the Gilded Age. But Wharton did not label this the Age of Innocence for no reason. Oblivious to their own irrelevance, the aristocrats of “New Year’s Day” look down their noses at the overdressed and underbred revelers who converge on the Fifth Avenue to celebrate the holiday.

When the fire starts, the family rushes into the parlor to chortle at the hotel guests spilling out onto the sidewalk in their vulgar finery: “Oh, my dear, look — here they all come! The New Year ladies! Low neck and short sleeves in broad daylight, every one of them! Oh, and the fat one with the paper roses in her hair ... they are paper, my dear ... off the frosted cake, probably! Oh! Oh! Oh! Oh!” Then someone recognizes Lizzie and Henry among those smoked out by the blaze, and the novella’s plot kicks into gear.
Posted by Edith at 6:13 PM No comments:

Email ThisBlogThis!Share to TwitterShare to FacebookShare to Pinterest
Labels: house

http://www.philly.com/philly/entertainment/20081221_An_author_pondering__not_fearing__death.html
In her book about writing fiction (still a good guide, I think), Edith Wharton says a novelist's main job is to think about his or her subject thoroughly. If she had said unexpectedly, charmingly, profoundly, imaginatively and simply, too, she would have been describing José Saramago in Death With Interruptions.
Posted by Edith at 11:27 AM No comments:

Katy Lederer on Galbraith and Wharton

"Ballad of the Bubble" in The New Yorker:
Then, in 2004, she spent a month at Yaddo. For reading, she took along study materials for the Series 7 stockbroker’s exam, as well as books by Thorstein Veblen and John Kenneth Galbraith. “Veblen talks about poetry as being similar to Latin, useless and a waste of time,” she said. “It’s a form of conspicuous consumption.” Still, Lederer said, she was struck by the metaphors he and Galbraith used. “The language is gorgeous,” she said. “Like Edith Wharton and Dorothy Parker, Galbraith is witty and sarcastic.” She started to crib phrases like “dead-level,” “squirrel wheel,” and “immiseration of the masses” for her verse.
Posted by Edith at 11:35 AM No comments:

From One Minute with Julian Fellowes:

Choose a favourite author, and say why you like her/him

Anthony Trollope and Edith Wharton. I like that they're so merciful. No character is completely indefensible, or completely good. Motives are always drawn in shades of grey.
Posted by Edith at 11:33 AM No comments:

Last of the Old Guard

Some people make the rest of us look like idlers. Case in point: Louis Auchincloss, who has written, on average, a book a year for six decades – even while practicing trust and estate law full-time for more than 40 of those years.

At 91, he’s produced his 65th book overall and 47th volume of fiction, Last of the Old Guard. The title refers to Ernest Saunders, a chilly New York attorney whose greatest passion is the law firm he founded with a Harvard classmate in 1883.

But Auchincloss, who was honored as a Living Landmark by the New York Landmarks Conservancy back in 2000, may well feel like the last of the old guard himself.

There’s something oddly comforting about reading this patrician novelist of manners, successor to Edith Wharton. You know, to a certain degree, what you’ll be served – rather like eating at an exclusive social club.
Posted by Edith at 11:31 AM No comments: