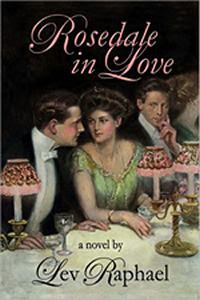 In honor of Edith Wharton’s 150th birthday yesterday, Kimberly Denny-Ryder has generously shared her review of this new novel inspired by Wharton’sThe House of Mirth.
The Gilded Age of America is one of my favorite time periods to read about.  This is probably due to the fact that I grew up near NYC and also made frequent trips to the mansions in Newport, RI owned by the billionaires of that era.  The amount of wealth that was thrown around in those days is truly astounding.  To see the ostentatious nature of some of the landmarks of that era are mesmerizing: houses with elaborate ballrooms, private tea gardens, marble EVERYTHING, etc. etc. – you get the idea.  When Lev Raphael approached me about reviewing Rosedale in Love, a historical fiction novel taking place in the Gilded Age, you can imagine my immediate acceptance!
The time is 1905, and America is booming.  Considered the first real decade of consumerism and materialism, Americans were spending their hard-earned money in droves.  At the center of this madness in New York City is Simon Rosedale, a Jewish financial wizard who has big plans to break into the elite upper-class society that controls everything there is to control in the city.  However, not having any beneficial family ties, and feeling slightly outcast due to his faith, Rosedale sets his aim on marriage as his way in to this exclusive club.  Enter Lily Bart, a down-on-her-luck member of this aristocratic society who has recently been fodder for the tabloids.  Rosedale sees a way in via Ms. Bart.  She’s hurt enough socially that she just might take the plunge with Rosedale.  But would she really marry someone like Rosedale?  Would this make the gossip go away, or would it intensify even further?  Add into this mix Florence , Simon’s cousin who is secretly head over heels in love with Simon and you have one hell of a love triangle.
The biggest compliment I can give this novel is that Raphael’s writing style makes you feel as though you’re reading a classic literature novel.  Raphael’s cast of characters are crisply written with exquisite vocabulary that made me enthralled with the world and people he had created.  Not all of his characters are original creations though!  If the name Lily Bart sounds familiar to you, it’s because she is the main character from Edith Wharton’s novel The House of Mirth.  Rosedale in Love is a fantastic companion piece to The House of Mirth both in style and story.

Re-imagined as Ellie Hart in modern day Cleveland, Edith Wharton's Lily Bart (fromThe House of Mirth) comes alive in Claire McMillan's Gilded Age.
Inspired in part by Irina Reyn’s (whom Claire McMillan thanks in the afterword) What Happened to Anna K, which transported Anna Karenina to modern day Brooklyn,Gilded Age transports Edith Wharton’s Lily Bart from The House of Mirth to modern day Cleveland. Why Cleveland? McMillan is a resident of the city (as am I!) and with descendants of iron and steel magnates walking the streets, it makes for the perfect setting.
McMillan’s tragic heroine, Ellie Hart (play on Lily Bart), returns to Cleveland from New York City after her much publicized marriage turns sour. Her filthy rich ex-husband dabbled in illegal substances and Ellie dabbled in other - often married - men, and a bitter divorce ensued. Ellie sees Cleveland as her second chance at love, respect and power, preferably with a wealthy husband by her side.
Ellie shifts her attention from one man to another, quickly finding another alternative if the first one does not pan out. She briefly flirts with P.G. Gryce, a boring naturalist with money oozing out of his pockets, before moving on to Randall Leforte, a flashy ambulance-chasing attorney. Leforte seems intent on matrimony, but Ellie loses interest and fancies herself in love with William Selden, whom she’s known since childhood.
Selden, as everyone calls him, is a college professor, an intellectual, and his own amorous pursuits parallel Ellie’s behavior. However, as a man, his antics are acceptable, while Ellie’s are gossiped about and deemed scandalous. Selden suffers no repercussions, while Ellie falls more and more on the social ladder, and more and more into alcohol, drugs and inappropriate relationships.
http://www.sheknows.com/entertainment/articles/962892/sheknows-book-review-gilded-age-by-claire-mcmillan

My Dear Governess The Letters Of Edith Wharton To Anna Bahlmann

http://www.npr.org/books/titles/154751800/my-dear-governess-the-letters-of-edith-wharton-to-anna-bahlmann
My Dear Governess is a surprising literary discovery that charts a life through letters. In 2009, the letters of Anna Bahlmann came up for auction: Bahlmann was an orphaned daughter of German immigrants who served first as governess and, then, companion to Edith Wharton for more than 40 years. One hundred and thirty five letters from Wharton turned out to be in Bahlmann's possession and they flesh out our vision of Wharton's life as a debutante, disappointed wife and determined... more
Posted by Edith at 4:17 PM No comments:

'The Innocents' author on the lasting influence of Edith Wharton


'The Innocents' author on the lasting influence of Edith Wharton

You know who’s hot right now? Edith Wharton. Even though she died 75 years ago, and she mostly wrote about turn-of-the-century American society, she’s still one of the most influential writers today. Earlier this month, Vintage Books released fetching re-issues of her four most famous novels. At the same time, two separate debut novels — The Innocents by Francesca Segal and The Gilded Age by Claire McMillan, both re-imaginings of Wharton novels — hit shelves within a week of each other. Segal’snew novel sets The Age of Innocence in a Jewish community in present-day London. She spoke to EW about Wharton’s unflagging relevance.
What inspired you to set an Edith Wharton novel in contemporary times?
I went through a phase of reading a lot of [Henry] James and Wharton a few years ago, and when I reached The Age of Innocence — probably the fourth or fifth Wharton novel I read in very quick succession — it just spoke to me. I read the opening scene, in the Academy of Music, and I saw it instantly as a contemporary synagogue.
Did you find that in some ways, Wharton’s work is so modern that you didn’t really have to switch it up much to make it contemporary?
Yes. It’s extraordinary. The Age of Innocence even contained a financial subplot that could have been written in the 21st century. I was reading it almost immediately after the Madoff scandal had unfolded, and she was eerily prescient.
What salient themes from Wharton’s work are especially resonant today?
I think, sadly, that a lot of her examinations of the roles of women have resonance now, despite the huge shifts in the role of women since she was writing. The frustrations of the domestic sphere — even very comfortable domestic sphere — was something she wrote about a lot. And then there was The Bunner Sisters, which was an incredibly dark, angry little tale about women in dire domestic circumstances.
http://shelf-life.ew.com/2012/06/13/edith-wharton-francesca-seghal/

Summer has opened at the Jack Studio Theatre in Brockley, London SE4 and closes on 26th of May. We are offering ‘Summer 2 for 1’ tickets to select contacts, this week only.

Summer by Julia Stubbs Hughes is the story of a young woman's first love affair. Based on the novella by Edith Wharton, Summer is presented by 20 South Street who bring this startling new play to life with the heat and vibrancy the tale deserves. A stark exploration into female sexual liberation and its consequences, Summer is a bold adaptation of a classic novel and is being published by Playdead Press to coincide with the production.

You’ll find reviews attached and you can also…
Check out http://www.thesummerproject.co.uk for more info.
Email info@greyswan.org.uk to be added to our ‘Summer 2 for 1’ list (subject to availability).
Go to http://www.brockleyjack.co.uk/  for venue info.
--
Katerina Stearman
Grey Swan
www.TheSummerProject.co.uk
@greyswanfusion
Posted by Edith at 3:08 PM No comments: 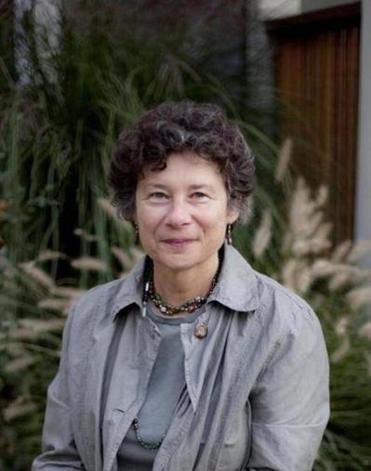 DAVID DASHIELL
Irene Goldman-Price’s wide knowledge of Edith Wharton’s life is evident in her book “My Dear Governess.”
In 2009 the personal papers of Anna Catherine Bahlmann came up for auction. Included in those were 135 letters from Edith Wharton to Bahlmann, who was 13 years older than Wharton and her governess, chaperone, companion, and secretary for 40 years. Yet until now Bahlmann has never been given public credit for her crucial role in Wharton’s life. In fact, Wharton mentioned Bahlmann only four times in her memoir, “A Backward Glance,” referring to her once as “My Dear Governess,” the title of this collection of letters, edited and annotated, superbly, by Irene Goldman-Price.
Though privileged, Wharton had a hard emotional life: Her father died when she was 18, she was a disappointment to her mother, she was jilted by her first fiance, and her marriage to Teddy Wharton grew — with his increasing mental illness — into a prison. Yet we know she had one passionate love affair, and although it did not end well, it is proof that she was more than the cool persona she showed to the world.
Much has been made of Edith’s youthful awkwardness, but the early letters addressed to Tonni (a play on the German Tante) have a wonderful freshness, as we see an eager, confident Edith revealing an abundance of literary and personal details. Here she is at 15: “I feel really beatific tonight [. . .] practiced violently one of Beethoven’s waltzes [. . .] made two rosettes for a new pair of slippers and generally behaved myself — a sensation still having the charm of novelty [. . .] As for me, I must [. . .] ask you if you have yet read Daniel Deronda [. . .] The story is nothing, & I do not care for the style, but the thoughts with which it overflows are wonderfully clever.”
The range of Edith’s reading is amazing, thanks to Bahlmann, who was a rigorous teacher. Together they read German literature and mythology in the original, and also in translation, Norse, Greek, and Roman mythology, and Arthurian legend, as well as English and American literature. Indeed, Edith’s intellectual curiosity, the very thing that made her such an outsider in the aristocratic world into which she was born, was largely fostered by Bahlmann.
Read the rest at http://bostonglobe.com/arts/books/2012/06/01/review-dear-governess-the-letters-edith-wharton-anna-bahlmann-edited-irene-goldman-price/OvHY70NGA4NBBtIlcabSRN/story.html
Posted by Edith at 1:43 PM No comments: